WHAT IS A COCKTAIL RING 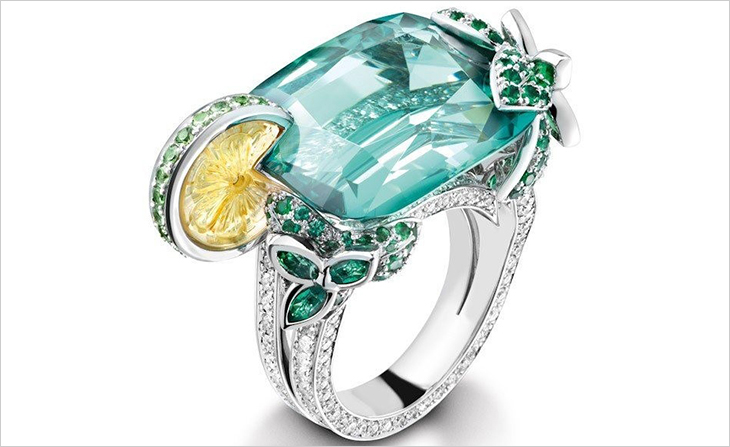 The expression "cocktail ring" identifies a ring with a large colored stone, flashy and eccentric, (rather) worn alone in the right hand, during events such as vernissages or cocktail parties: on these occasions the outfit should be formal.

The word “cocktail” could have been coined at the time of prohibition in America. It was a nationwide constitutional ban on the production, importation, transportation, and sale of alcoholic beverages from 1920 to 1933 and that time, joining to an in illegal parties, was considered really cool and trash.

Breaking the law by drinking forbidden drinks, gesturing at each sip of scotch to booster through the amazing gem settled on the ring, the beauty of the girl who was showing it off ...

Thus, the ring becomes the distinctive feature for the lady wearing it and the color of the gem arises as the founding element. “Red” as for the passion or “blue” as for the infinity or “yellow” as for friendship and so on. Nowadays we are facing a deep misunderstanding about the right classification of a cocktail ring: the most important thing is the involvement of a ring on which it should be settled a precious or a semi-precious colored stone, whether it be a cabochon or it be a facetted; the stone should be of considerable large size, and the setting has to be in “griffes”.

The cocktail ring can be equally worn at the ring finger or at the middle finger according to its size, but you must strictly avoid left hand, as it is reserved for the wedding ring or engagement ring.

The use of multicolored semi-precious stones (hyaline quartz, rose, amethyst, citrine, smoky, blue topaz, iolite and garnet) has widened the outfit of the cocktail ring to a more widespread daily use, from morning to evening, leaving the more challenging patterns (such as tourmaline, beryl, tanzanite, mandarin garnet) behind the sunset and onwards.